Mount Etna Travel Guide: What To See, Do And Eat On Europe’s Highest Volcano 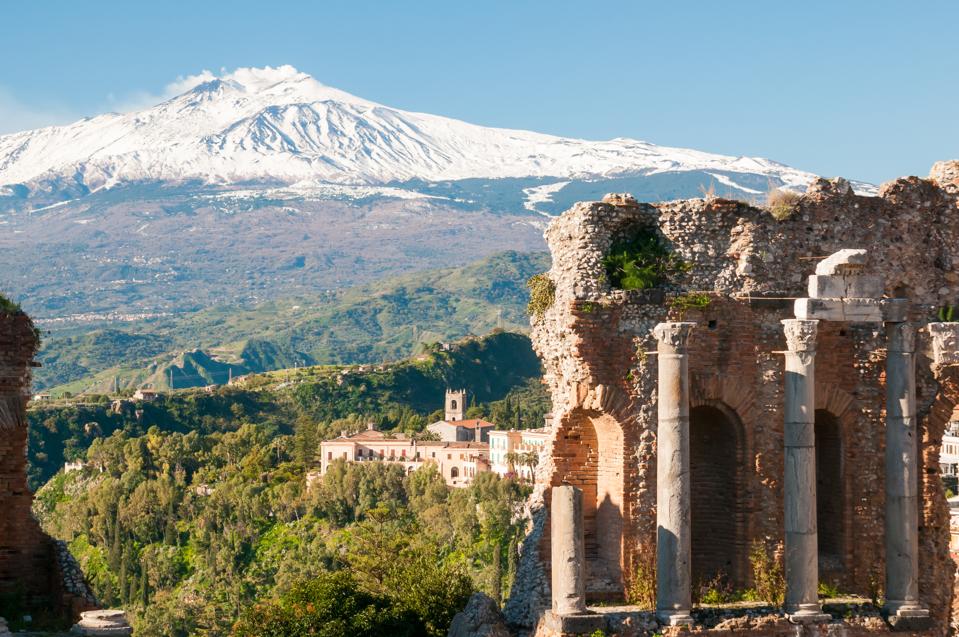 A view of Mount Etna from the ancient Greek Theater in Taormina.

One of the most active volcanoes in the world, Etna is among Italy’s most unique destinations for adventure travelers, oenophiles, and gourmands will appreciate the wealth of activities offered on its fertile soil. Because while volcanoes tend to be associated with destruction, they can also be a springboard for discovery and shed light on the history of an entire region. Here are the top experiences you shouldn’t miss. 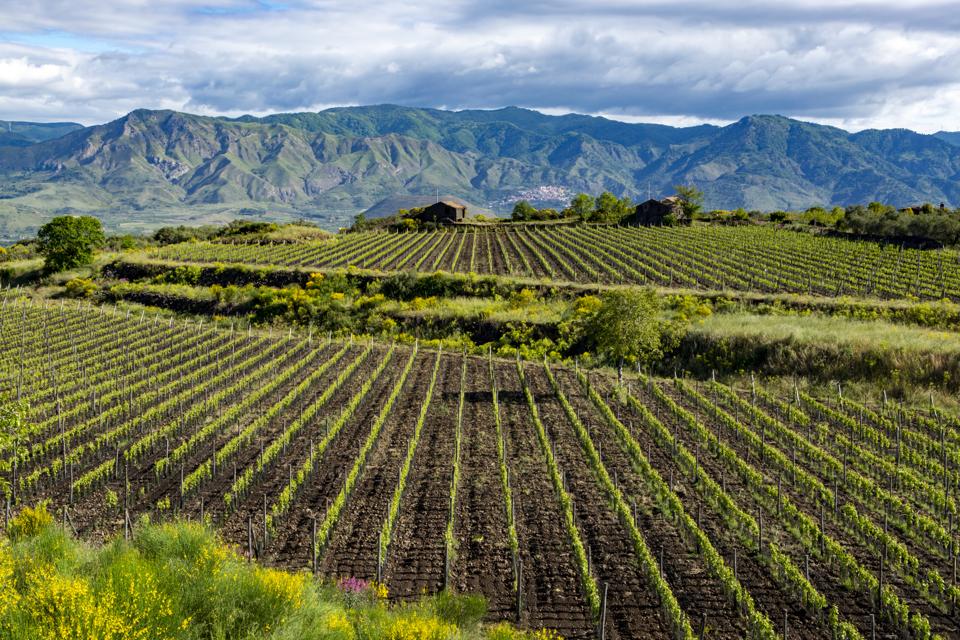 In the past 20 years, Etna’s volcanic wines have skyrocketed from obscurity to stardom, coveted by consumers who appreciate their balanced acidity, minerality and the dedication it takes to cultivate grapes in difficult conditions. Here you’ll find predominantly local varietals, including Nerello Mascalese and Nerello Cappuccio red grapes and Carricante and Catarratto white grapes, grown in a stout “alberello” style with vines that are low to the ground. 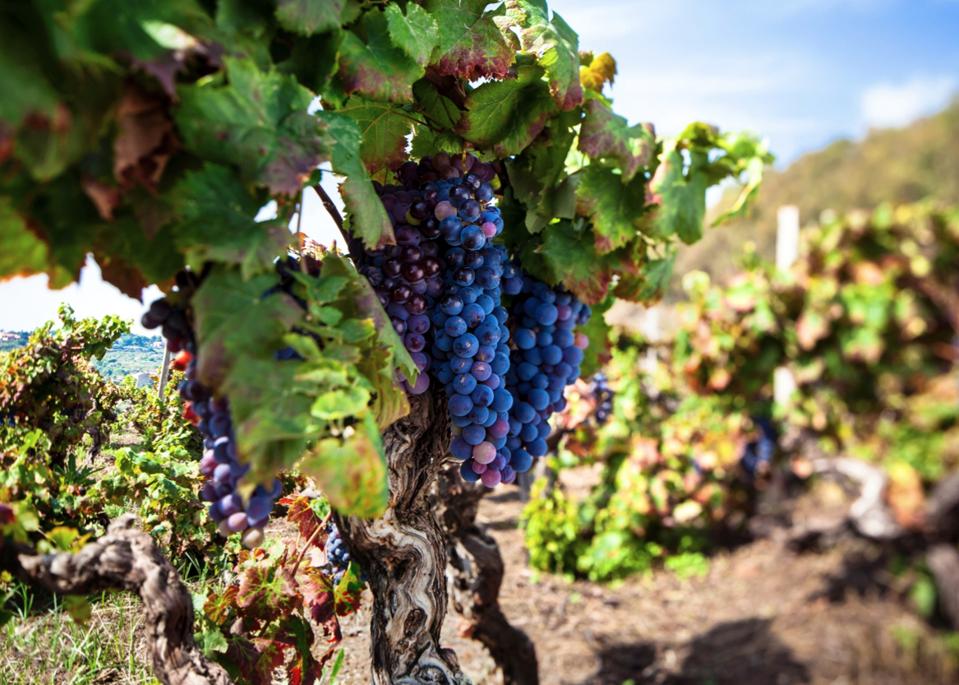 For an excellent introduction to the volcano’s wines, take a private guided tour with Sunny Sicily, a boutique travel company that provides chauffeured, custom-made tours throughout the island. The Etna Wine Tour takes you to two estates where you’ll join the owners for a walk through the vineyards, wine tasting and light lunch. Pick-ups are arranged from all major cities on the eastern coast and promise a relaxing way to soak in views of the volcano. 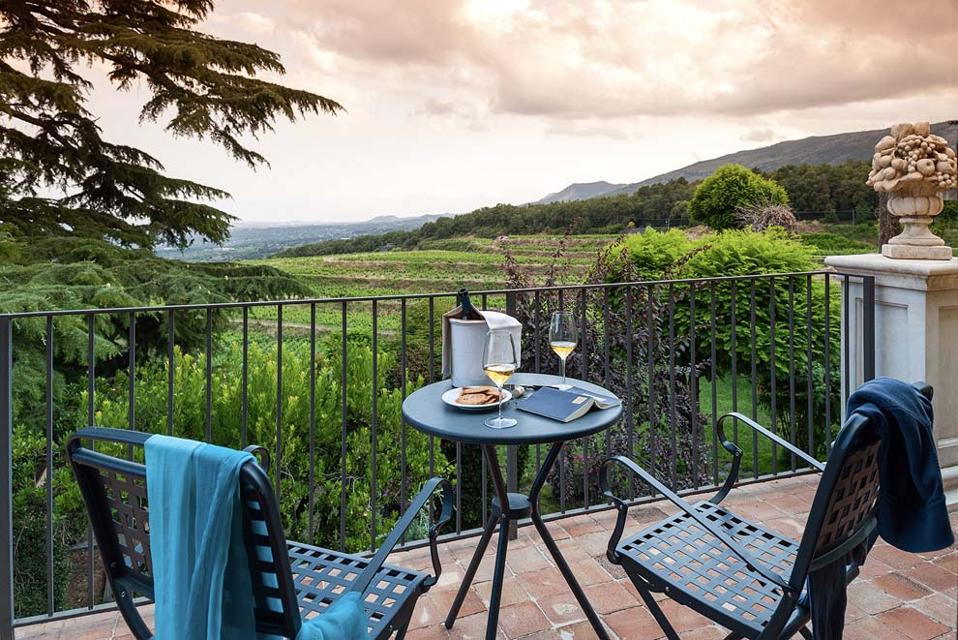 Barone di Villagrande is one of the oldest wineries on Mount Etna.

Barone di Villagrande, a 10th generation family-owned winery established in 1727, is the oldest wine-marking estate on Etna. The Nicolosi Asmundo family played a pivotal role in creating the identity of Etna wines when Carmelo began bottling wine in 1941 with single varietals, separating local red and white grapes for the first time. The Etna Rosso Contrada Villagrande is a standout which you can enjoy sipping while enjoying views of the terraced landscape below. 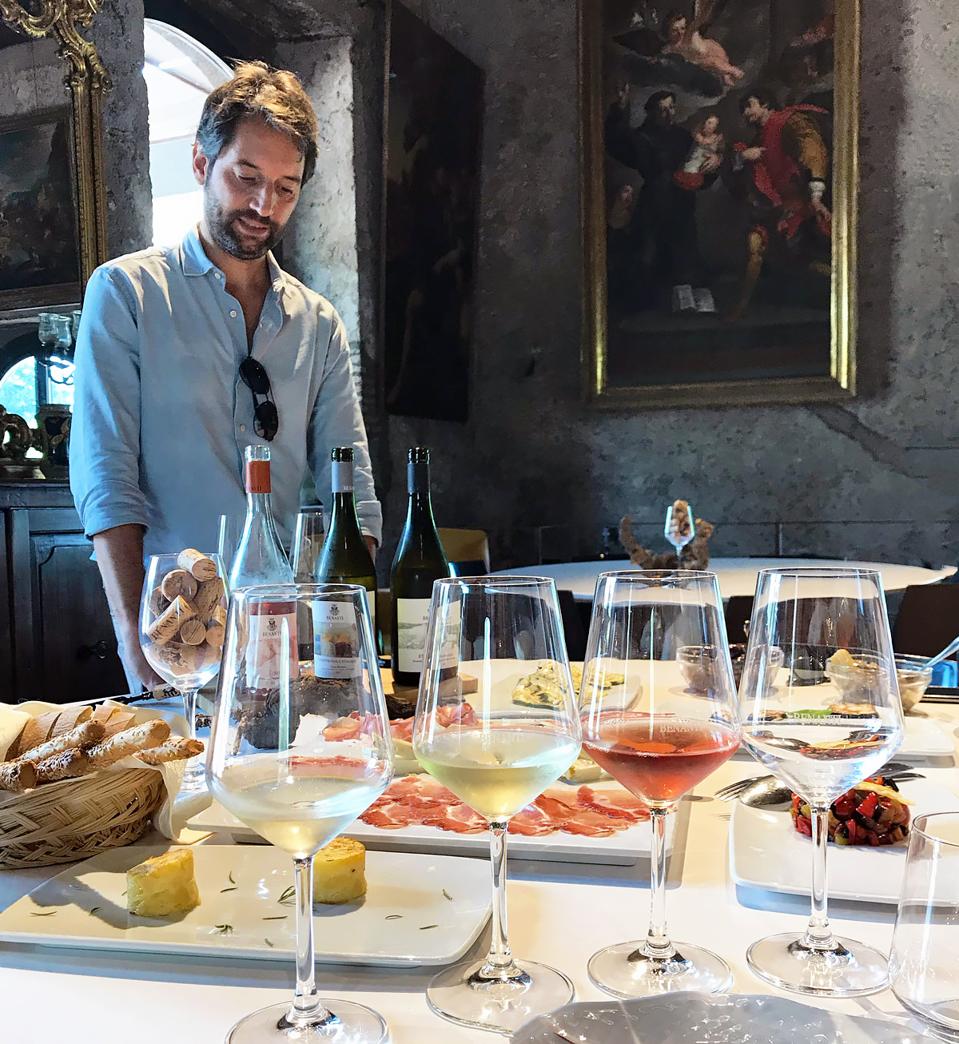 Giuseppe Benanti, a pharmaceutical entrepreneur with a passion for wine, was one of the first modern investors on Mount Etna when he founded his winery in 1988. With the help of a local consultant and wine advisors from Piedmont and Burgundy, Benanti was keen to set a new standard in the area and the estate has received international acclaim for its quality products. Today, Benanti is managed by Giuseppe’s twin sons, Antonio and Salvino, who continue to innovate and promote the dynamic territory.

Sicily is a land of contrasts and nowhere is this more apparent than on Etna, where fire, earth, air and water all converge into one. Etna Experience takes travelers on hikes along the volcano: opt for a morning tour, sunset walk or full-day hiking tour depending on your level of interest. You can also walk along the Central and South Eastern Craters while stepping upon a mix of ancient and recent lava flows. 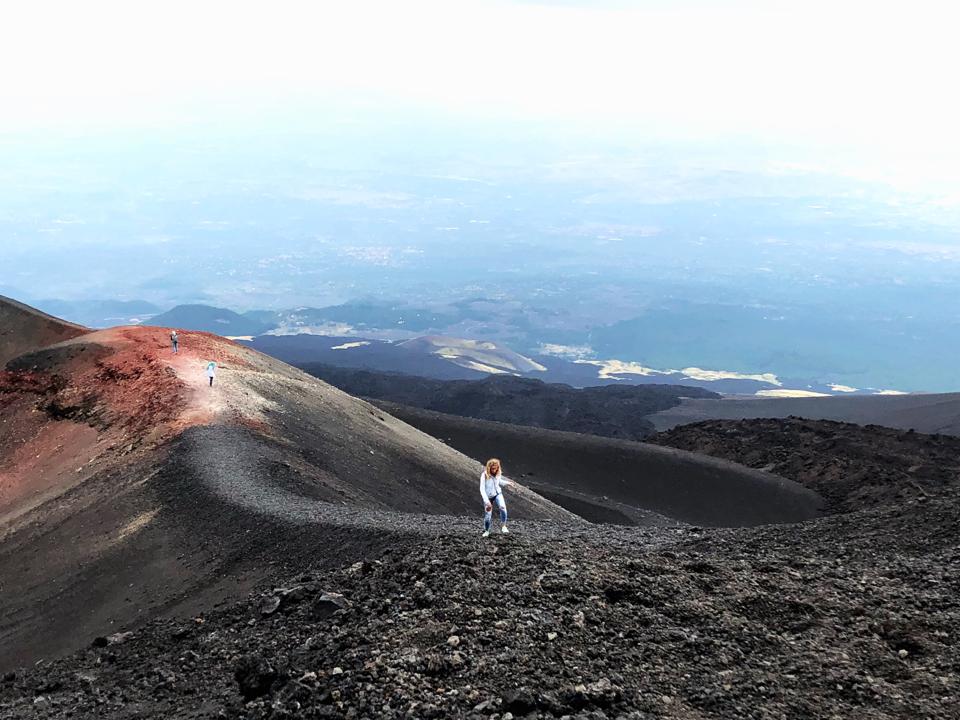 Horse lovers may want to explore the volcano from a different perspective – from the back of a saddle. Sicily Horse Riding leads a number of excursions around Etna, from half-day tours in the vicinity to multi-day excursions that take you as far as Cefalù, a charming beach town in north central Sicily. 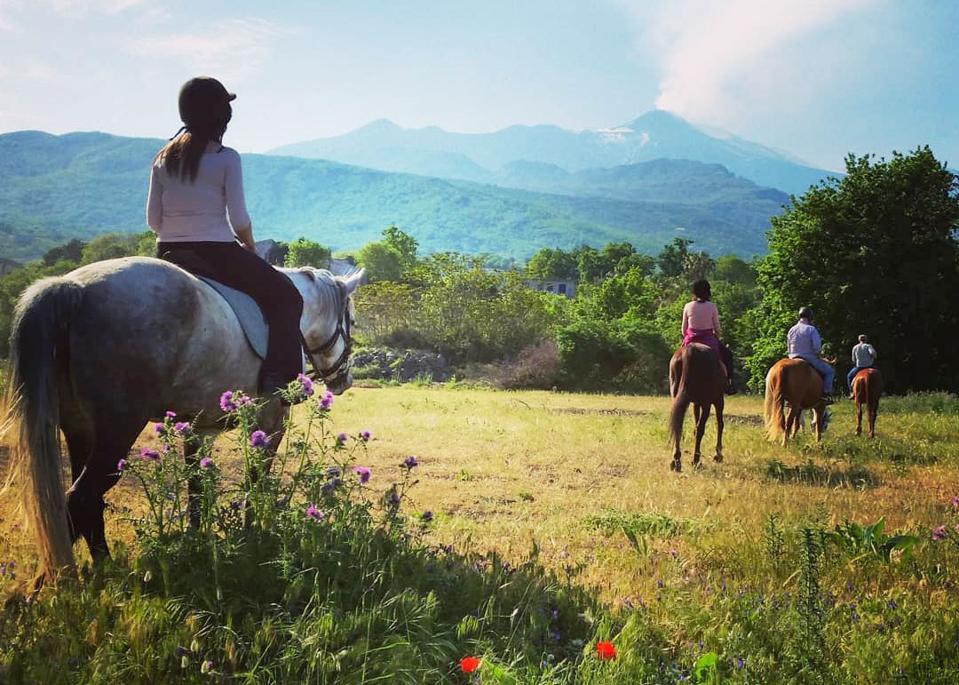 If you’re a horse lover, consider exploring Mount Etna’s many trails from the back of a saddle.

If you visit during the winter months, you may even be able to ski on the volcano. Rising nearly 11,000 ft above sea level, Etna’s summit is often covered in snow from November through March and boasts ski resorts in Nicolosi and Linguaglossa. 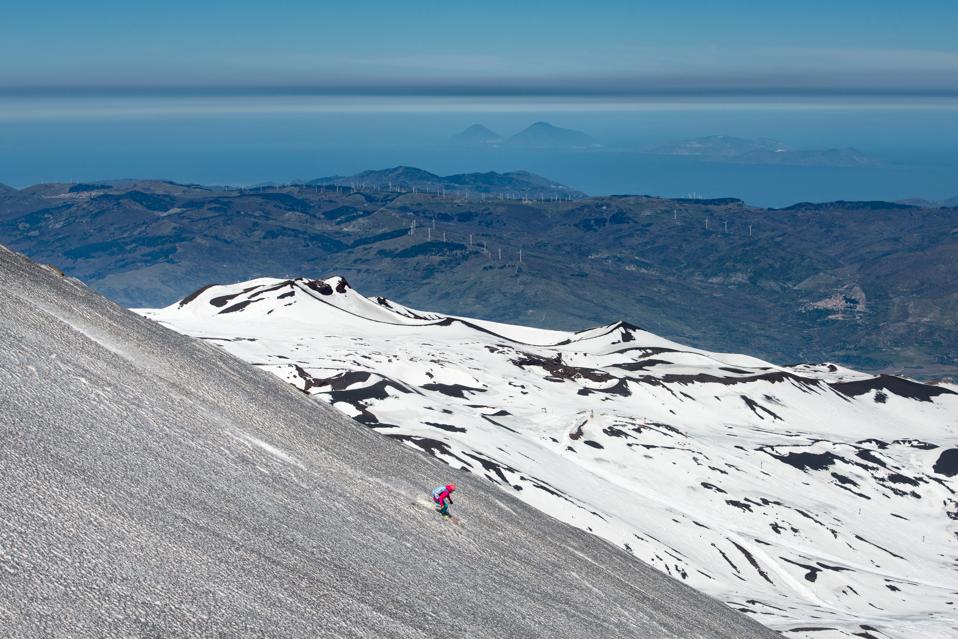 Skiing on the Etna volcano with the islands of Lipari and Stromboli visible in the background.

Sleep In A Boutique Wine Hotel

For a relaxing stay on the volcano, spend a few nights at Tenuta di Fessina, one of the most delightful boutique wine hotels in the area. Historically a social winery built around a 17th century palmento, or Sicilian “cantina”, the property overlooks a picturesque vineyard and produces a number of highly lauded wines. 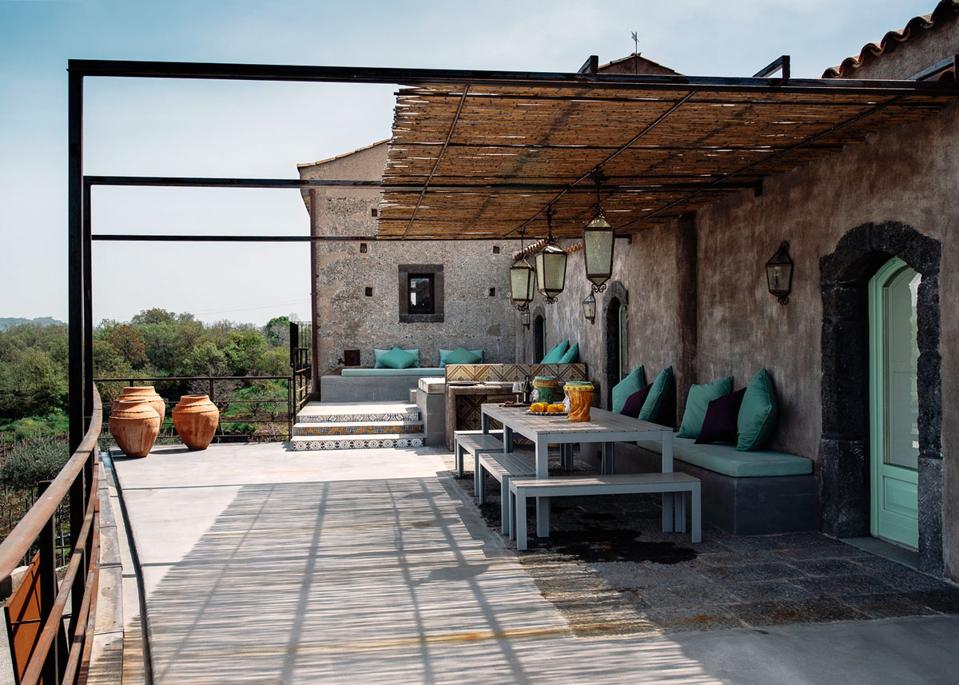 Owned by Silvia Maestrelli, an aesthete and entrepreneur who hails from a winemaking family in Florence, Tenuta di Fessina is one of the first women-led wineries on the volcano. “I visited Etna in 2006 and fell in love with its strong contrasts, its wild nature and the volcanic energy,” she explains. “I had a visceral reaction to the land and opened Tenuta di Fessina in 2007 – I wanted this to be a place where friends and family could gather and enjoy a laid-back lifestyle with contemporary comforts.” 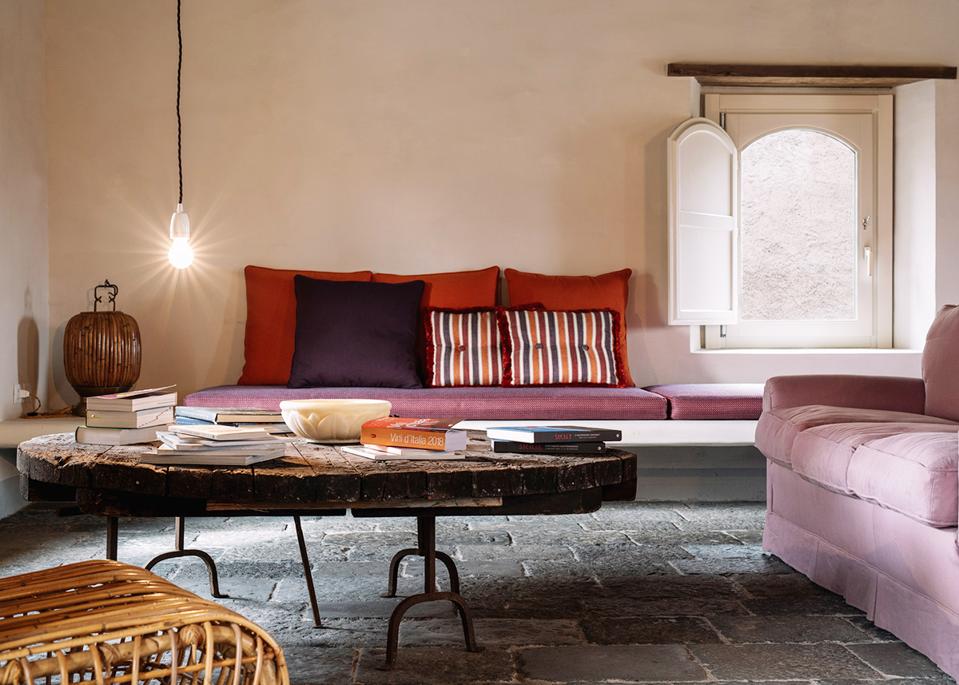 The property boasts numerous living areas and shared spaces to gather with friends and families.

The property was refurbished to honor its original foundations and each of the seven bedrooms has design features that juxtapose the earthiness of the mountain with Ms. Maestrelli’s artistic vision. You’ll find exposed lava rock walls, traditional Sicilian tiles and stone bathtubs along with colorful furnishings from her own home, luxurious bed linens and fragrant Ortigia brand amenities that create a truly sensuous atmosphere. 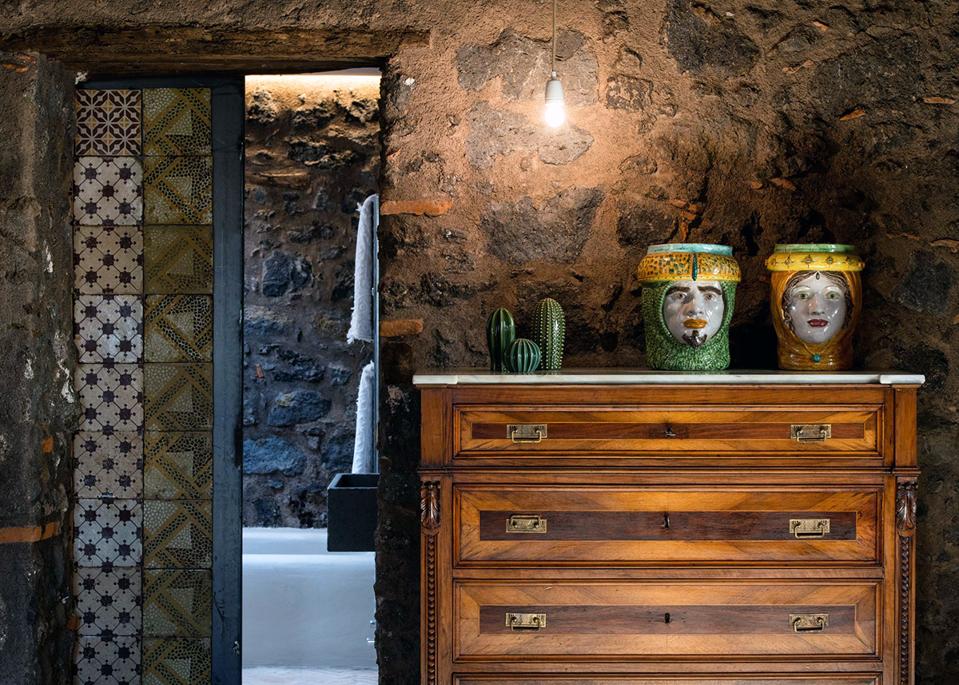 Enjoy A Taste Of Local Cuisine

The Pistacchio Verde di Bronte, one of Sicily’s most iconic crops and a DOP product (Protected Designation of Origin), is a highly coveted ingredient and considered the “Green Gold of Sicily”. It is harvested on the volcano in odd years and is used in some of the region’s most famous dishes, from sweets like granita and cannoli to pastas and deep-fried arancini rice balls. Try some of the region’s best pistachio pastries at Bar Conti Gallenti in Bronte or at Bar Pasticceria Santo Musumeci in Linguaglossa. And mark your calendars for the next Sagra del Pistacchio, or Pistachio Festival, which will be held in September 2021. 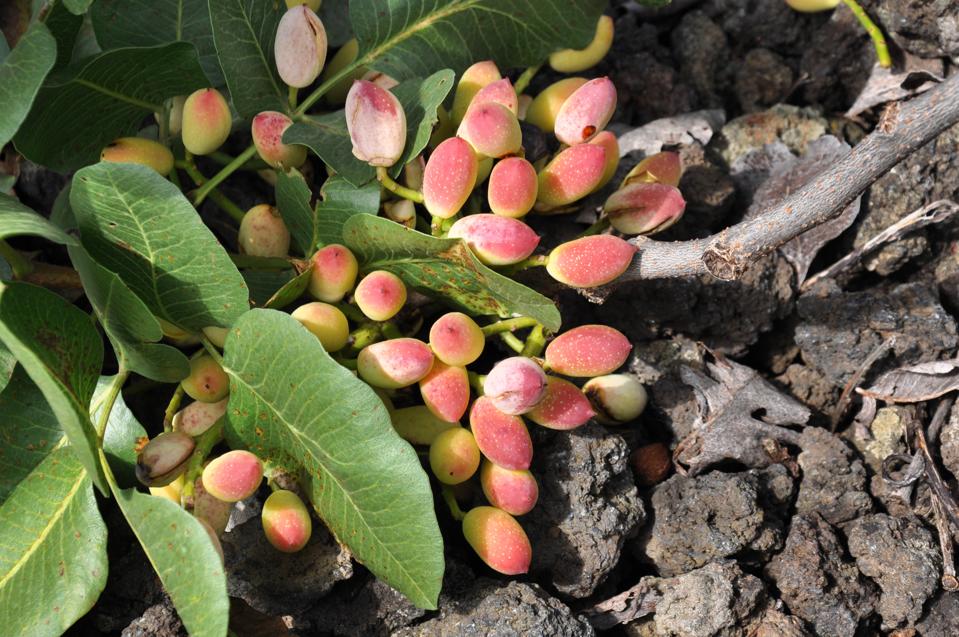 Pistachios are harvested every other year on the slopes of Mount Etna in Bronte, Sicily. Photo by: … [+]

A unique place to taste homemade, local cuisine is through the Mamme del Borgo, an association of a dozen women living in the small town of Motta Camastra. The mamme host culinary-focused events and cooking demonstrations during the summer months, inviting visitors into their homes to see how locals live and eat in Italy’s small towns. 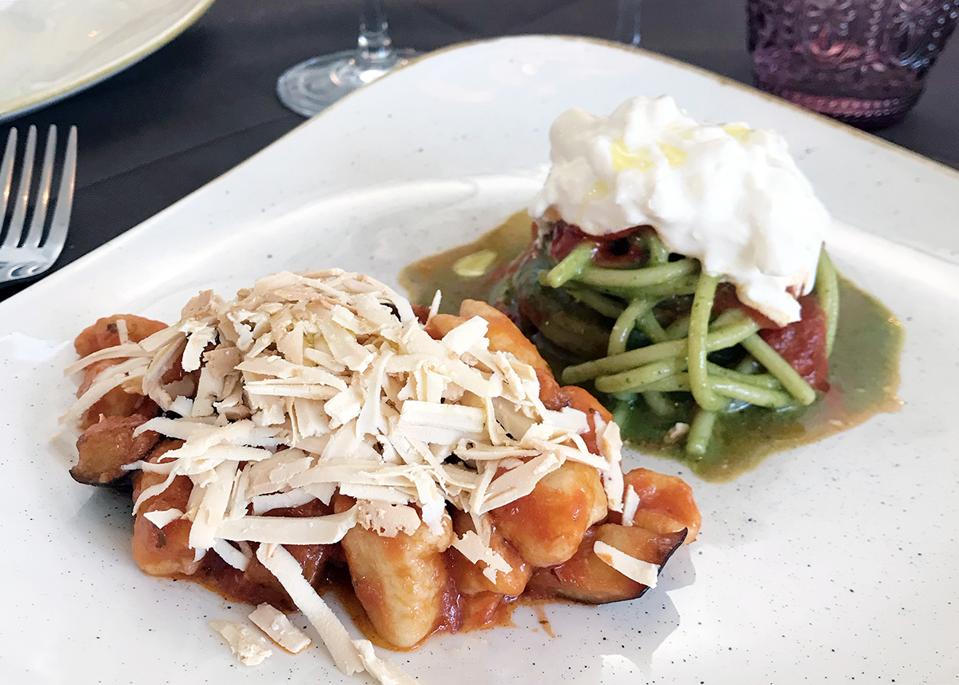 If you want a more traditional restaurant, try Trattoria LinguaGrossa which serves a wide range of Sicilian dishes in a contemporary setting. The fresh pastas are delicious, like Spaghettoni with wild fennel pesto, toasted almonds and breadcrumbs, and Gnocchi alla Norma with eggplant stewed in tomato sauce and topped with salted ricotta and fresh basil.